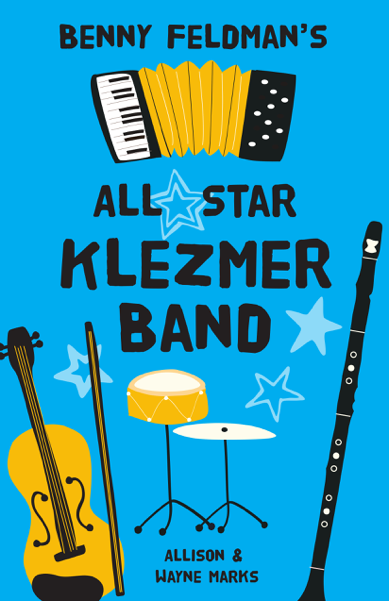 Benny Feldman spends his days at Sieberling School obeying his number-one rule for surviving sixth grade: blend into the background. So when he signs up his klezmer band to play in the school talent show, his classmates are shocked. Teased by guitar superstar and former friend Jason Conroy, Benny vows to win the trophy and erase the embarrassing nickname that has haunted him since his performance in an unforgettably disastrous first grade Sabbath play.

But, there is a problem. Benny Feldman’s All-Star Klezmer Band is only a figment of Benny’s imagination.

With the show a few months away, Benny, an accomplished fiddler, embarks on a quest to assemble a band that will beat Jason’s rock group at the talent show. His search takes him to an arcade convention, a potato chip factory, an oddities shop, and a storage room stacked with cans of creamed corn and succotash. Along the way he meets Jennifer, a jazz-loving drummer; Royce, a bow-tie-wearing clarinet prodigy; and Stuart, a braggart accordion player from Cajun Country. He also learns a great deal about the joys and sorrows that lie at the heart of klezmer and discovers that being different can be wonderful.

Eventually, the ragtag and renamed “Klez Mis`ts” mount the stage and the tension-filled climax will have young readers wondering until the end if Benny and his band can pull off a miracle.

Allison and Wayne Marks met in a Canterbury Tales class at the University of Cincinnati, where they both graduated with degrees in English Literature. They are the authors of three Jewish children’s picture books: Og’s Ark (Kar-Ben 2016, PJ Library in Russian selection), A Gefilte Fishy Tale (MB Publishing, 2016), and The Art Lesson: A Shavuot Story (Kar-Ben 2017, PJ Library selection, Bank Street Best Children’s Books of 2017, and Tablet Magazine’s Best Jewish Children’s Books of 2017).

This book has ‘everything’ in it! Everything wonderful!...

“This book has ‘everything’ in it! Everything wonderful! … Friendship, Judaism, life lessons, music of all kinds, angst of sixth grade first love, shyness, overcoming stage fright, honoring family, how to deal with bullies, jealousy… and even redemption. And all of this ‘wonderfulness’ is via music, and Benny’s ragtag band of friends, who come together in amazing ways. It’s about the love of music and how ‘All music is connected… and how music connects us all.’… This book is magic!” – Sydney Taylor Shmooze

The young reader will surely enjoy this musical romp through sixth grade.

“The young reader will surely enjoy this musical romp through sixth grade.” – Association of Jewish Libraries

“Benny Feldman’s All-Star Klezmer Band is intelligent, heartwarming and funny; it subtly introduces the reader not only to klezmer but also to the Jewish contribution to music, from Yip Harbury to Pink” – Angela Kiverstein, The Jewish Chronicle