Q&A with Devora Busheri for The Donkey and the Garden 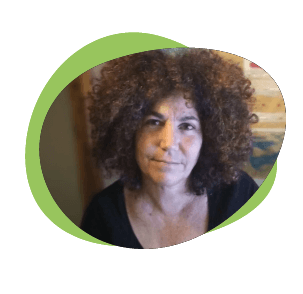 1. Rabbi Akiva was an incredible Jewish scholar and sofer – when did you first learn about him and Rachel?

‘Rabbi Akiva and Rachel’ is one of those phrases that one feels one had heard since forever. It’s a concept embedded deep in the Israeli heart. When one hears the phrase ‘Rabbi Akiva and Rachel’ one immediately feels as though an imaginary hand were plucking at one’s soul, groping for something in the mysterious darkness of the heart: true love! That’s what it is! But where is it? Forever fleeting, forever to be remembered in the combination of these two names.

2. What other Rachel and Rabbi Akiva stories have inspired you? Why did you choose to include ‘Love Thy Neighbour as Yourself’?

There is a story about Akiva and Rachel’s extreme poverty in their early days together: they had only a barn to sleep in, and every morning Akiva plucked the straw from Rachel’s hair. As a curly girl, that story is the most romantic story I can think of.

3. Which Torah stories about Rachel do you like reading?

The only story that really makes me happy is the one I wrote this book about. Other stories I know about Rachel are sad. She came from a rich home and left it for extreme poverty to be Akiva’s wife. That makes me sad; I don’t think that scholars have to be poor. And the happy ending – even unto eternity (no doubt Akiva and Rachel have their eternal place in the Jewish Hall of Fame) – doesn’t make it better for me. She had to wait for Akiva for twenty-four years before he came back a rich and successful leader. I hope my own girls and boys, and all the other girls and boys in the world, don’t have to wait that long for companionship and prosperity.

4. The book quotes Midrash Hagadol – can you explain what that and the Talmud are?

The Talmud is written as a protocol of endless meetings among sages that occurred between the first and seventh centuries. In the Talmud, the sages are mostly preoccupied with working out how laws can be derived from the Torah. Even though the Talmud volumes are written books, they are considered ‘oral Torah’ because they document discussions between people (as opposed to the Torah, which is the written word of God). As discussions between people happen, the conversation often digresses to stories, jokes and other thoughts. So, in between ‘laws’ in the Talmud, one can also find lots and lots of stories, jokes, ideas, puns, association games, personal stories, even gossip, that the sages bring up. These stories are called midrash (as opposed to halacha, which means ‘law’). There are many books devoted to collections of such midrashim. Midrash Hagadol is one of them.

Let’s connect this to Rabbi Akiva: while sages in the Talmud discussed the laws Akiva decreed, they also had all kinds of personal stories that they knew about him. One of these stories is his epic relationship with Rachel.

5. Rabbi Akiva was a shepherd who became an outstanding student when he was forty years old – were you a good student at school? Did you study Torah? Or ever tend sheep?

Never saw a sheep up close. And even from afar, when I saw flocks of sheep, I didn’t like the way they smelled! I was a very good student, but not well behaved. I knew my maths and my spelling, but unfortunately I excelled at chutspah.

In Israel everyone studies Torah at school. I loved the language of the Torah. I loved that you are allowed to read nuances and subtexts into every choice of every word. Interpretation is my favourite pastime. I believe all human relationships are really based on the ability to interpret words, symbols and signs. That is why all arts are so important. Art is good practice for reading meaning into things.

6. Rabbi Akiva did not learn to read until very late in life – have you achieved anything that you are proud of?

I wanted to be an author since I learned how to read. So I am very happy to have published several books already.

7. What other Jewish teachers or rabbis have inspired you?

There was a time in my life when I translated lessons by Rabbi Carlebach into Hebrew. Among other wonderful things, he said that it’s not that we encounter more people in a week than our great-grandparents knew all their lives because we have technology (trains and planes and such). It’s because our generation’s mission is to meet as many other people as possible that trains and planes (and the internet that happened after he had passed from this world) were invented in our times. This is a very consoling and eye-opening thought for a mother and an educator who looks at the way children spend their days communicating via technology all day.

8. When you were growing up, what was your favourite Hebrew children’s story or Talmud tale?

When I grew up I loved hearing about Joseph’s love for his little brother Benjamin, because I was the youngest child in my own family.

9. Have you worked with Menahem Halberstadt before and did you discuss the illustrations with him? Did you provide any guidance?

I had not worked with Menahem Halberstadt before, but I knew his work and had immense respect for his art. I think the only thing I asked was for him to think of them as a man and a woman from the ‘romantic comedy’ genre – that is, equal in strength, but different in other things. I don’t think the author should say too much (or anything, really) to the illustrator. The crafting of words and that of images are two separate talents.

10. What advice would you give to children, or little wannabe scholars, about learning their aleph bet and Talmud?

Don’t worry about being linear: the Talmud weaves back and forth. It is intertextual, combining Torah and Mishna, and everyday talk, and gossip and philosophy. It has a multitude of doors – don’t try to be systematic when you knock on them. It’s okay to skip things, to ponder over other parts for ages, to read the end before the middle.

There is a rule of thumb for Jewish interpretation of the Torah: there is no such thing as early and late in the Torah; there is no chronological order in the Torah. It is much like the way a dream works – if we could say the whole dream at once, that would be the real content of the dream. Of course, though, we need time to spread what happened in our minds, give it words. So, sure, some words must come before others in the sentences we create, but that does not mean we are not allowed to play back and forth with the images and words; they are all on a par.

The same goes for the Talmud. Start wherever. Love whatever part of it. It is yours. It should be the stuff of your dreams. Own it.

11. In the book you talk about Rabbi Akiva, and others, learning to do things when they were ‘all grown up’. What have you learned to do recently?

Funnily enough, my most prized achievement this year is that I have learned how to write UX (user experience) content for hi-tech. It was fun learning it, and they say I am quite good at it! Hurray! But I think I will stick to children’s books after all.