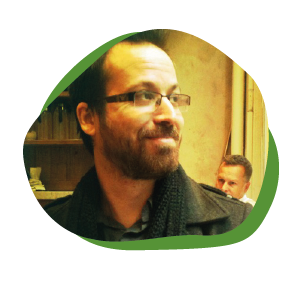 1. Fish and chips is a classic British dish, but you live in Israel! Have you eaten it in Israel – or England – or anywhere else?

I had my first fish and chips when I was thirteen, on my bar-mitzvah trip to England. And I fell in love with it! Sadly, it’s not a popular dish here in Israel, or I would be eating it on a regular basis.

2. Joseph Malin’s shop was opened in the 1860s in London’s East End – what research did you do to get the illustrations right?

I travelled back in time and went straight to the London market, of course! Seriously, though, it was probably one of the hardest pieces of research I have done for a picture book, since authenticity was paramount for me. I used a lot of photos which either I found on the internet or the publisher shared with me. When you work on a book like this which takes place in a different time and place, research never stops, so you constantly need to look for new photos to describe the different objects you want to conjure.

I also watched a lot of British period TV dramas. That was great, since I love watching British TV shows. It is somewhat of a shortcut, since someone else has done all the research for you, but it’s also a good way of checking whether you have a valid vision for your work.

3. Does anyone know what Joseph Malin really looked like?

Not that I know of.

4. When did you realize you were a talented illustrator and where did you learn?

I don’t think of myself as talented. I do feel blessed that people react to my art and ask me to draw for them. I experienced that aspect from a very early age, possibly when I was six years old or so. In school, more often than not I was on the class’s decoration committee (I hope that is the proper translation for this phrase). When I was in Junior High, they actually allowed me to skip certain classes so I could draw posters for the headmistress.

5. How do you think children – and their parents – will react to your illustrations?

I have no idea. I do hope they like them. When I illustrate, I mostly think about myself and what makes me smile or laugh or even sad. Sometimes, the illustrations are appreciated differently by the audience, which can be quite surprising and almost magical, since they react to something deeper in the work that I had not planned.

6. Is it true that your children’s names are hidden in some of the artwork? Are there any other secret details?

There are so many secrets implanted in the book! Since the illustrations are very detailed, I was able to hide lots of small stories and recurring actors, such as the hungry goose, several chickens and even people I know. My partner Maia and I are shopping in the first spread, and even the publisher’s children are there. My kids’ names, Zoe and Lenny, are featured in the store signs on the back cover.

That’s a tough question! Every illustration I create is somehow important to me. There are those that were easy to create so I appreciate that quality in them; others took a long time to complete so I am very much invested in them as a craftsman. I do have a special fondness for the illustration where Joseph and Annette are in each other’s face. It is an amusing, distilled human moment to me.

8. Who do you regard as the greatest illustrators of our time?

There are too many good illustrators out there to choose from, too many styles and way too many techniques. I am influenced by Tommy Ungerer, Saul Steinberg, Marc Boutavant, Oliver Jeffers, Tom Guald and Sara Ogilvie – to mention just a few.

9. You are an Israeli working on a British story – do you think that matters? Or are you more comfortable illustrating things you have seen and experienced?

I think it does matter in some ways. Most of my work is confined to stories about modern families, living in small apartments, dealing with their issues, so naturally when I am working with a text that has a different subject, I need to work harder. This keeps the process fresh for me, keeps me invested and keeps me interested.

I don’t know if it’s important, but I am certain that some things are easier to write or draw when you have experience of a matter. For example, after becoming a father, I found it easier to illustrate families. However, I don’t think anyone should be the judge of who can write (or draw) what. A creator who is working with material that is unfamiliar to him or her does need to take into consideration that people well versed in the matter will quite possibly be his or her audience, so the writer or illustrator needs to work harder and respect that. Furthermore, such creators may suggest a new and fresh perspective that is harder to come up with when approaching a familiar subject.

11. In 2020 you won an award for the first book that you have written and illustrated yourself. Can you explain what the book was and what the award was?

The book is called The Boy who Mailed his Family, and was published in 2019 by Tal-May Books. It tells the story of Yoav, a boy who just wants to be left alone so he can draw, read and watch TV. Other members of his family (the dog included!) are really in his way – they boss him around, mess up his room and call him for dinner when he’s in the middle of reading a book! So he does the only logical thing one can expect: he sends them abroad, one by one, in a box.

From an author’s point of view, the book was really well received and got a lot of attention and accolades. In addition, the illustrations won a special merit award, a prestigious honour granted by the Israel Museum for excellence in the field of picture book illustrations.

I have no idea, really. As a freelance illustrator, I almost always have too many big projects on the table, from writing a new picture book to creating a new graphic novel. Right now I am editing and producing an Israeli comics anthology featuring some of the best alternative cartoonists from Israel, so that is a welcome change in my line of work.