Signs in the Well 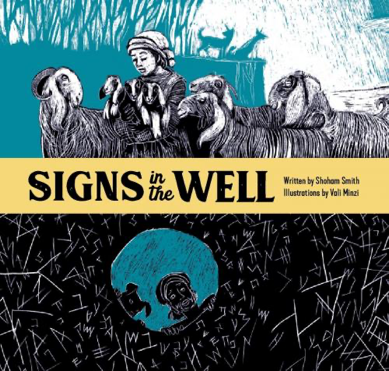 Young Akiva was a goat-herd. He was good at his job and content with his life, except for one thing – he had never learnt to read. One fateful day he decided it was time to change this…

This is the inspirational story of Rabbi Akiva’s personal journey from poor goat-herd to a leading scholar. Elegant prose from renowned author Shoham Smith and striking illustrations from award-winning artist Vali Mintzi illuminate this beautiful and universal tale about how it’s never too late to learn.

Shoham Smith was born in Jerusalem in 1966, grew up in the Jordan Valley and studied industrial design at the Bezalel Academy of Art and Design at Tel Aviv University.

An author of collections of short stories and children’s books, Smith received the 2009 Prime Minister’s Prize and is a two-time winner of the ACUM Award for Furthering the Publication of Children’s Books, in 2011 and 2015. Smith has also won the Devorah Omer Prize (2014) and the Lea Goldberg Prize in 2017, for A Treasury of Hebrew Legends for Children and My Aunt Lea Goldberg respectively. Smith lives in Tel Aviv and works as an author and translator. She lives with her partner and three children and teaches writing workshops.

Vali Mintzi was born in Bucharest, Romania in 1971, and made Aliyah to Israel in 1989. Mintzi graduated from the Bezalel Academy of Art and Design Jerusalem. In 2009, Mintzi began illustrating for children’s books with Who is the Fairy Queen and was awarded the Israel Museum Ben-Yitzhak Award for Illustrations of Children’s Books in 2012 for Little One in the Park. Mintzi is also a successful graphic designer, having previously been Art Director for Haaretz’s children’s magazine, Einayim, and worked at the Israel Museum. Mintzi currently lives in Jerusalem with her partner and three daughters, and works as an illustrator, graphic designer and puppetry designer.

“Shoham Smith has wisely and sensitively adapted one of the finest stories of ancient Jewish legend … Thanks to her endeavour, new generations will be introduced to this magical literature.” – Professor Avigdor Shinan, The Hebrew University, Jerusalem

Her adaptation presents this treasure of Jewish literature

“Shoham Smith’s language is clear, rhythmical, unadorned and not childish … Her adaptation presents this treasure of Jewish literature to children unapologetically and with a sympathetic approach to the roots of our culture.” – Dr Inbar Raveh, Children and Youth Literature, David Yalin College, Jerusalem

“Smith’s clear text manages to free itself from the intimidating shadow which envelopes the phrase ‘Legend of Ancient Jewish Sages’ by treading confidently along the fine line separating simplicity and complexity, between day-to-day and high languages. [The book] deals with the importance of slow processes, with the power of knowledge, and stresses the need to master cultural heritage.” – Tal Marmelstein, Israel Today

This is a fine, inspiring book about striving and reaching one’s goal.

“This dramatically illustrated book—its white on black etchings endowing the images and story with depth as well as artistry—tells the story of the great sage Akiva. A hard-working, compassionate shepherd, he had never gone to school and yearned to know how to read. At age 40, humiliated because he still could not read, he was encouraged to begin to learn the aleph bet. This is a fine, inspiring book about striving and reaching one’s goal.” – Hadassah Magazine

Beautiful, detailed woodcuts illuminated with one or two colors complement the text

“Beautiful, detailed woodcuts illuminated with one or two colors complement the text, and give the book either an older or ‘retro-hip’ look, depending upon taste. The story and the message are universal: one should not give up and it is never too late to learn.” – The Association of Jewish Libraries