The Sages of Chelm and the Moon 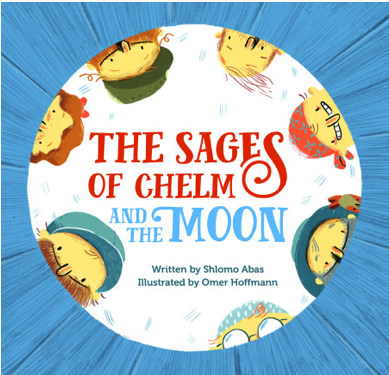 Take a peek inside

Welcome to the topsy-turvy world of Chelm – the city of wise fools celebrated in Jewish folklore. According to legend, Chelm was populated by preposterously silly townsfolk.

The people of Chelm have a problem. They love to walk the streets at night under the light of the radiant moon. But every now and then, the moon disappears from the sky and they can’t dnd their way home. Perhaps someone is stealing it, or maybe it’s hiding on purpose?

Being very clever, the wise people of Chelm know exactly what they must do. They will buy a brand-new moon – one that will shine clear and bright every night. But will everything go according to plan?

Shlomo Abas, born 1948, is one of the leading children’s writers in Israel. To date, he has published 164 books, of which 43 are his original work as children’s books, while the other 121 books are fables, folktales, and legends which he has collected, compiled and edited.

A majority of those deal with Jewish folklore and culture in all its diverse communities.

Many of his books have become bestsellers.

He lives in Givatayim with his wife and their two children.

It's always good to hear about the adventures of the wise people of Chelm.

“It’s always good to hear about the adventures of the wise people of Chelm. Shlomo Abas’ The Sages of Chelm and the Moon delightfully illustrated by Omer Hoffman (Green Bean Books), is a funny and fresh retelling of the folk tale. Here, the townsfolk plot to buy a new moon—that won’t disappear and make their nights so dark they can’t find the way home.” – The New York Jewish Week

They were absolutely, thigh-slappingly, heart-stoppingly foolish

“They were absolutely, thigh-slappingly, heart-stoppingly foolish—which is where much of the fun lies in the Chelm stories.” – Global Literature in Libraries Initiative

“This whimsical story relates how the wise fools of Chelm conspire to purchase a full moon to illuminate their village ‘each and every night of the year’. It is hard not to laugh at the antics of those who want a moon that ‘looked down on them and smiled’. Award-winning artist Omer Hoffmann’s illustrations are charming.” – Hadassah Magazine

What a delight that Green Bean Books has brought this prolific Israeli author to an English-speaking audience!

“What a delight that Green Bean Books has brought this prolific Israeli author to an English-speaking audience! Award-winning illustrator, Omer Hoffman, has created colorful, detailed illustrations in an almost cartoon-like style, stamping lots of personality onto the foolish Chelmites. This book will be sure to please young and old alike.” – The Association of Jewish Libraries

A wonderful bed-time story for the entire family!

“The stories of the Sages of Chelm are among the celebrated treasures of Jewish literary tradition, especially known for their humoristic character and moral teachings. This lovely little book offers one of the most famous stories of this kind, about the Sages of Chelm and the Moon, in a truly appealing manner. I read it with my two children, 9 and 7, and we all very much enjoyed both the lucid and pleasant text and the superb illustrations. A wonderful bed-time story for the entire family!” – 5-star Amazon review from Aya Elyada

I read this book to my three-year-old daughter and she absolutely loved it.

“I read this book to my three-year-old daughter and she absolutely loved it. We had a good giggle as we read through pages and looked at the brilliant illustrations. It was nice to find a book that I found as equally entertaining!” – 5-star Amazon review from Laura Lawton